There were celebrations all around when Roy Hill Community Foundation (RHCF) Fellowship recipient Yarlalu Thomas was named 2020 WA Young Australian of the Year.

Yarlalu Thomas is a Nyangumarta Pitjikarli man, originally from Warralong, southeast of Port Hedland. He was the first in his community to complete high school after being awarded a scholarship to attend Scotch College. He enrolled in a Bachelor of Medical Science and Doctor of Medicine (MD) at the University of Sydney but has taken a year off between the two degrees to work with the Foundation.

Yarlalu’s work has focused on the Roy Hill Community Foundation-funded project Pilbara Faces which provides more accessible, quicker and non-invasive diagnosis for children with rare and genetic diseases through facial imaging. He has visited communities in the Pilbara explaining the project to the elders and parents and then working with the children.

In his work through the Foundation, Yarlalu also launched the UNESCO-endorsed Life Languages project to translate medical terminology into Aboriginal languages and Indigenous languages internationally. His work is assisting the medical staff and patients with translations and recordings of terms and phrases, taking some of the difficulty out of consultations with Aboriginal patients.

At the awards ceremony at Government House, Yarlalu thanked the RHCF for the wonderful opportunity given to him to work on projects across the Pilbara.

Jeanette Hasleby, Manager Community Development said the members of the Roy Hill Community Foundation could not be more thrilled for Yarlalu for being recognised for the inspiring work he is doing.
“It has been a privilege to see Yarlalu engaging with communities in the Pilbara. He is a wonderful role model and gives his time generously wherever he can. He thoroughly deserves the recognition but is a very humble recipient,” Jeanette said.

As part of our NAIDOC Week 2019 celebrations, Yarlalu visited the ROC to give a presentation providing insight into his own upbringing and the important work of the Pilbara Faces program. 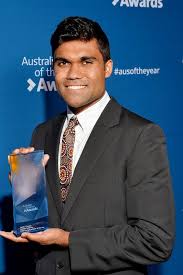